Volcanic 4 room
Demos, on Oric, it's a reality.
There are only a few, but they start to be nice !

The following pictures are from the demo I've called "Just Oric".

It was specially made for beeing presented at the "Volcanic 4" demo-party...
It starts by a copy of the Windows 95 boot picture, followed by a wobbling "Dbug" logo...

It continues with a mega-scroller, followed by some polygons moving around the screen...

The demo finished with a fully colored plasma, and by a big bouncing "Oric Megademo" picture.

Then, the credits, and it's finished.

In order to give you a hint about the look and feel of the ST News International Christmas Coding Convention, you can find on the right some pictures taken during the party. 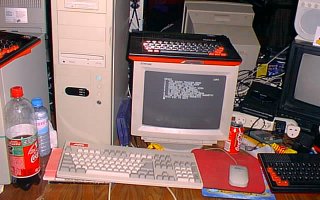 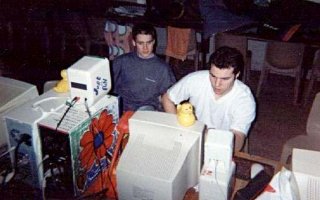 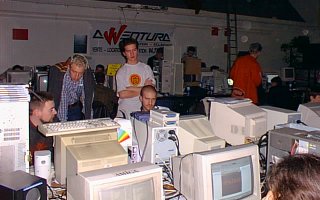