This demo was made for the VIP 4, and actually we started to prepare it right after the VIP 3 was finished.

This demo yet again beats some records: 3 coders (Jede, Twilighte, Dbug), 3 graphic artists (Exocet, Mooz, Romu), totaly compatible with the Oric 1, Atmos and Telestrat, and works with either Microdisc and Cumana drives.

VIP4 room
In order to give you a hint about the party look and feel, you'll find on the right some pictures sorted in chronological order:
arrival to the party, some photos of the team beeing working, sleeping and receving their price for having won the OldSchool compo, and final a photo of the Flamby eating competition

State of the Art

The SOTA remake screen was not actually planned to be in the demo at all.

We had finished the demo on the party place, and somebody (Twilighte I think) wanted to reuse the interference effect of the previous demo.

I was reluctant doing that *again*, but then Romu happened to have a mpg capture of the SOTA and said he could rip out the dancers, he cleaned that up frame by frame during few hours, and well, it's in the box :) 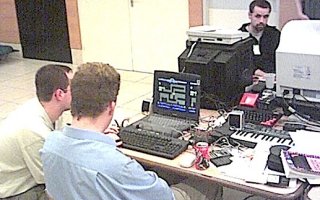 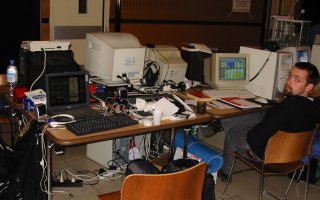 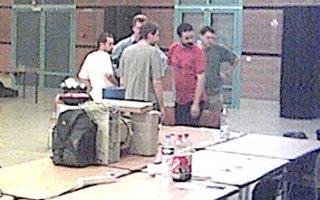